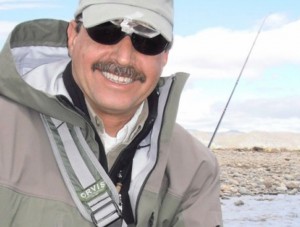 Capt. Joe Demalderis (known to most as Joe D.) was introduced to fly fishing in 1970. He has been fishing the Delaware since the mid 1970's and has been an Orvis Endorsed Fly Fishing Guide for more than twenty years.

Joe has traveled throughout North America fishing for trout, Atlantic salmon and steelhead. In the winter months, Joe hosts fly fishing trips to Patagonia for wild trout, and to Andros, Bahamas for bonefish.  As an experienced saltwater fly fisherman, he also spends many days each season in his center console fishing the NJ coast for striped bass, false albacore and blues. A fan of warmwater species too, Joe can frequently be found fly fishing for carp, muskie, northern pike and smallmouth bass, both on his own and with clients.

Joe has appeared in many national fishing magazines like Field & Stream, Trout, American Angler, Guy Harvey Magazine, On the Water, and others. You can also find him quoted in several fly fishing books like, Paul Weamer’s Fly Fishing Guide to the Upper Delaware River, Joe Cermele’s Total Fly Fishing Manual, Kirk Deeter’s Little Red Book of Fly Fishing, Terry and Wendy Gunn’s 50 Best Tailwaters to Fly Fish, and others. He has appeared in several episodes of Field & Streams Hook Shots series, and has done several instructional videos for Field & Stream magazine. Other videos where you’ll find him are Bight, a bonefishing chronicle, REEL, a Fly Fishing Film Tour entry filmed on the Upper Delaware System, and several others. Joe is also a regular contributor to the Orvis News, Ask the Experts column.

In his guide days alone, Joe has logged tens of thousands of hours on the water. A life member of Trout Unlimited, Joe also serves on the Board of Directors of Friends of the Upper Delaware River. In 2010 he was named The Orvis Endorsed Fly Fishing Guide of the Year.